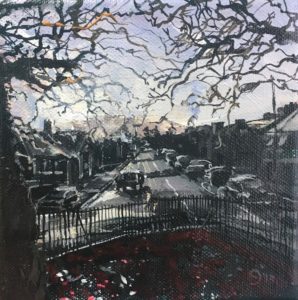 Solar Bodies in Purkinje Effect is a new dimension of Beata’s ongoing project entitled ‘Evolving Landscape’. Solar Bodies is inspired by the Purkinje Effect, that is, our eyes’ adaptation of the dark*, an effect that introduces a difference in colour contrast under different levels of illumination.
Beata’s series of small paintings, which form the artist’s debut show in Geneva, is aiming to capture our eye adaptation in two transformative times of a day: dawn and dusk; the pivotal times when the changing of colours and our eye perception occurs. All Beata’s pictures are inspired by Dublin and the Wicklow Mountains, Ireland.
*Purkinje Effect in Physiology (sometimes called Purkinje shift or dark adaptation) is the tendency for the peak luminance sensitivity of the human eye to shift toward the blue end of the colour spectrum at low illumination levels. The effect is named after the Czech anatomist Jan Evangelista Purkyne. (Source: Wikipedia)
Purkinje Effect in Astronomy: the shift in spectral sensitivity of the human eye from the yellow/green towards the blue as the illumination is reduced. (Source: Glossary of Astronomy and Astrophysics, J. Hopkins, University of Chicago, 1976, 1980, p. 143)
Purkinje Fiber – Cardiovascular – heart contraction responsibilities.
Purkinje cells – in the cerebral tissue adding to neural connectivity; fluidity of impulses.